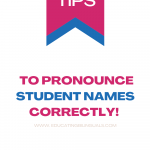 Connecting with students is an important part of teaching in K-12 classrooms. Students feel better when they know that their teacher cares. Teachers can show students that they care by learning to pronounce their names correctly. Understanding that a student’s name is part of their identity is important for teaching all learners.

Learning a student’s name is not only crucial to non-English speakers. Name pronunciation is important to all students, no matter where they come from. Did anyone ever mispronounce your name? If someone ever mispronounced your name, you most likely understand how uncomfortable this feels.

Every name has a history

A name has a history, a special meaning, and it is part of their identity as a child. My name has a history of its own. I was named Sugelis because my parents wanted my siblings and me to have similar rhyme names. I don’t think my parents realized how often my name would be butchered in the USA when they named me Sugelis.

Although my name ended in “s” the letter “s” was rarely pronounced. For this reason, my name, when pronounced, sounded like “Sue-haely.”  Unfortunately, a careless mistake in my official documentation drastically changed my name and its pronunciation. Someone mistakenly wrote an “a” at the end of my name, and I became Sugelia (sue-h-lleah). According to officials, this was a mistake that could not be corrected (according to officials) in time for me to get my first passport.

In 1991 when I first arrived in the United States, I brought a new name that I had to get used to because it was new to me. I can’t count how many times I had to explain my first name because of mispronunciation, spelling, and uniqueness. I heard teachers call me Sue-yell-ah, Sugarly, and many others. Not only that, but I also remember being called sometimes and not responding because I was not used to my new name.

Furthermore, I dreaded the start of a new school or a new class. Sometimes I hesitated to meet new people because I didn’t want to “explain” my name. In addition to not being used to my name, I experienced what every child experiences when their name is spelled and pronounced differently – embarrassment and discomfort each time.

As educators, we must be respectful of other student cultures. We know that kids do not choose their name, and they are used to using their given name. Not taking the time to learn a student’s name can be seen as disrespectful and have a lasting impact.

Not taking the time to show that immediate respect may also be seen by other students as if it is ok to disregard student identities. This, in turn, might send the wrong message to other students around us and influence other student perceptions. Remember that kids learn from what they see and experience. When other kids see you take the time to use proper pronunciation, they will also do the same thing.

You will see that most non-English names are given to English language learners. As an English learner, a student may feel uncomfortable explaining their name using a language they are still learning. I remember feeling very awkward in middle school each time I had to explain my name to teachers. Avoid putting kids on the spot during their first day of school because this adds to the stress level they feel getting to know you and others in the school.

There are several things we can do to pronounce a student’s name correctly and ensure that we value everyone’s identity, including their name. A great start may influence student performance and our relationships with students. Focus on resolving anything you can control and lessen the negative impact an incorrect pronunciation may bring.

One thing to keep in mind is the language a name may come from. For example, in Spanish, we pronounce all letters sounding out each letter sound. I have seen how people tend to change my daughter’s name, Amaia. For example, one may rush to say a-may-ah, instead of ah-m-a-e-a. For years, I told myself that I would not name my kids a name they had to explain; however, I have heard my daughter explain her name several times.

Consider the following suggestions to foster a positive relationship with all kids.

Most likely, the percent of students with a unique name will not reflect most of your class. One way to address your doubts about name pronunciation is to contact the family ahead of time. This may be a simple phone call to introduce yourself and ask how to pronounce the student’s name. Then, imagine how much a family will feel knowing that you took the time to connect with them.

The main office is often the first to meet new students during new registrations. During new school registration office hours, an interpreter is usually available to help with new registrations. Ask the interpreter to help with figuring out the names of students and their pronunciation. Furthermore, have the interpreter write down the pronunciation so that others can see it at a glance. Schools may train office personnel to do this regularly during their office hours. Teachers can also contact the office to inquire so that this can become the norm.

Practice before the first day of class

In most schools, a teacher is often given a new registration notification at least one day before a learner shows up to class. As you’re notified of new student registration, remember to check for non-English names right away. Doing this will allow you to practice a student’s name ahead of time to ensure proper pronunciation.

A hard-to-pronounce name takes practice learning but is never impossible to learn. Practice saying the name aloud to yourself and others if necessary—practice writing the name and its pronunciation.

Ask someone that speaks that language

Just because a student speaks English does not mean that you should wait to ask the student how to say their name. Remember that an awkward pause raises students’ awareness of discomfort, making them feel like they are being watched. Asking someone to help will lessen the pressure on the student and yourself.

Write down the pronunciation

The key to making sure that you are pronouncing a name correctly is to remember its pronunciation. To remember a pronunciation, you may need to write down the pronunciation as you say (phonetically) in either English or your native language.

If you use a seating chart, add the phonetic pronunciation to the seating chart. You may also want to write it on a sticky note that you refer to regularly.

Ask the student before class

Use interpreting resources to figure out similar situations that may seem small but are very important. For example, an interpreter that speaks the same language as the child may ask you to spell out the name, so be ready to spell it out.

Believe it or not, several websites help people with name pronunciations. Most of these websites allow you to input a name for you to hear its pronunciation.  Some popular websites are pronouncenames.com and hearnames.com.

If all else fails, remember to apologize to anyone that you have mispronounced their name. Apologizing will show a student or any person you care about getting things right with them and building relationships. Also, consider apologizing in front of the class so that others take the time to figure out the student’s name and help as appropriate.

I hope that this post addresses the importance of pronouncing a student name correctly has given you some new ideas to tackle the task of student name pronunciation. Remember that practice makes best, and in this case, practice is what it takes to learn a new name even when it seems misspelled properly!

Questions? Share any suggestions or your experience with name pronunciations.