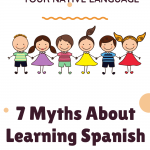 It is sad to hear how many families for one reason or another decide not to teach Spanish to their children. I have heard families say that they regret not making sure their kids learn Spanish. For this reason, I share about the benefits and importance of teaching Spanish to your children. Myths about learning Spanish.

Myth 1: There is no need to speak Spanish if I live in the United States

The idea that it is not necessary to speak Spanish in the United States is one of the myths that I hear the most. But have you thought of why so many monolingual parents make sure their children learn more than one language? I have seen how many non-bilingual professionals recognize the need for their children to learn to speak another language.

This is shown when we see how most children who participate in dual language programs are children of monolingual parents. It’s great to see how other cultures are interested in learning Spanish.

Myth 2: If my child learns Spanish, he will speak English with an accent

My siblings and I all have an accent because we learned English after we learned Spanish. Children who learn English and Spanish at the same time do not speak English with an accent. This is true for children of American or Hispanic parents.

Myth 3: It’s hard to force my child to speak Spanish

It’s not about forcing a child to speak Spanish. The most important thing is to teach them the importance of knowing two languages. Help them understand that being bilingual is an advantage, not an obligation. Spanish knowledge must be treated as part of our identity and culture. By speaking Spanish, we can communicate with more people and family members. Enjoy other types of music and television and communicate in Spanish when we visit Spanish speaking countries.

To get our children to learn more languages, we need to create routines or plan on how to expose children to use Spanish. One way to achieve this is to speak only in Spanish at home and demand that they answer in Spanish.

Some parents expose children to the language by visiting their country of origin. They also plan events that expose the child to the language. Once a child starts using two languages they get excited and their fluency improves when practicing.

Sometimes it’s a bit hard to get your child to speak Spanish if their friends only speak English. By understanding the importance and advantages of knowing Spanish children are able to use English with their friends and Spanish with other people. Sometimes friends become interested in learning Spanish which excites children to learn better.

Myth 5: I’m not returning to live in my home country

Just because we don’t plan to go back to our home country doesn’t mean we should stop using our native language. What if for some reason or another we have to go back? Or better yet, what if our children one day decide to visit? We must prepare for whatever life brings us. Even if we don’t return to our country it is good to know the language in case we visit.

As a student I have had to explain, present, share, or write about my family origins. It was always great to be able to speak about my origins, culture, and languages.

Another myth about learning Spanish is the assumption that it is hard to learn Spanish. Teaching Spanish should be part of our daily routine. One way to make sure your child learns Spanish is by enrolling in a school that teaches Spanish from kindergarten. If you know the language you can speak Spanish at home because the school will always teach them English.

There are also many resources and ideas online to help families who want to teach their children Spanish. If you do not have access to bilingual programs, teach them to read and write at home. It’s a matter of making the process fun and showing them the pride of being bilingual.

Myth 7: My child is afraid or ashamed to speak Spanish

Being afraid or embarrassed almost always occurs when a child still does not understand the importance and benefits of knowing Spanish. It is also due to a lack of practice. Children who become accustomed to speaking two languages develop the ability to switch from one language to another when needed. That’s why we should start early and not take a step back.

Talk to them about TV characters who are bilingual or talk about what it means to speak Spanish for you. Share about your identity and help her understand how beneficial it is to be bilingual.

These myths about learning Spanish are just examples of why many families decide not to share their language with their children. Over the past few years, I have had the privilege of meeting many adults who regret not learning their parents’ native language.

The importance of learning another language is embraced by many of these people who choose to learn another language as adults. This and many more reasons are what have convinced me that speaking two languages is the best.