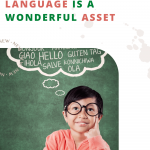 Does your child speak a language other than English at home? Does your child receive schooling primarily in English? If yes, congratulations on having a heritage language learner.

In the United States, English is the de facto dominant language; thus, any language other than English can be considered a “heritage language” for speakers of that language (Peyton et al., 2001). Languages other than English are often referred to as “foreign” or “second” languages. However, these languages are not foreign or second to particular individuals or communities; instead, they are familiar in a variety of ways.

What is a Heritage Language?

The term “heritage” language can be used to describe connections people have between a non-dominant language and a person, a family, or a community. In the United States, one out of five people speaks a language other than English at home. These heritage languages are a valuable asset.

Academically, bilingual students have benefited from increased vocabulary and comprehension (Andreou & Karapetsas, 2004). Aside from numerous cognitive benefits of being bilingual, children who grow up speaking a heritage language have advantages over more career and personal opportunities as well. As a parent of three heritage language learners, my ultimate goal is to raise three kids who are not only bilingual but also biliterate.

As parents, we are our children’s first teachers. What we do at home makes a huge difference in children’s language, literacy, and academic development. A rich home literacy environment often leads to better academic performance (Boerma et al., 2017). Studies show that if parents take an active role in children’s language and literacy development, it sets the strong foundation needed for their life-long academic success. Subsequently, we as parents need to find ways to empower our kids to embrace heritage languages and culture. There are several ways to help children develop their heritage language.

READ TO YOUR CHILD!

I can’t put more emphasis on the benefits of parent-child book reading. Research shows that children who are read to frequently from an early age enter school with better language and literacy skills, which may in turn promote children’s academic development (Scarborough & Dobrich, 1995). What’s more, reading in children’s heritage language is one of the best practices to develop language and literacy in their home language.

Parent-child book reading was not only effective in promoting heritage language learners’ second language and literacy development but also was found to benefit heritage language acquisition (Li & Fleer, 2015). When reading to your child, remember to scaffold your child to use words actively and engage in interactive conversations with you in this context.

You may ask prompt questions, expand your child’s verbalization, link the text to daily life experience, and give praise during reading. These verbal interactions during parent-child book reading can enhance children’s language and literacy skills by encouraging children’s use of language, as well as by promoting their interests in reading (Baker et al., 2001). Therefore,  I always tell my husband, if you have no activities planned, go read to your kids.

Ask for advice from your parent friends who also have heritage language learners at home, or even build a support group to come up with activities to facilitate children’s heritage language use together. Additionally, in this interconnected world, online websites and APPs would be extremely helpful, where you could even hire a tutor for your child. How fascinating! I always tell myself that I am not alone in this journey and I can always ask for help.

A heritage language is a valuable asset

Ye Shen is a Ph.D. student in the School of Education at the University of Delaware. Her research interest lies in language and literacy development in diverse populations of people, specifically bilinguals. She is interested in reading-writing connections and cross-language transfer of reading and writing skills among bilingual students. As a mom of three heritage language learners, she also studies biliteracy development among this understudied heritage language population.

Lutz, A., & Crist, S. (2009). Why do bilingual boys get better grades in English-only America? The impacts of gender, language and family interaction on academic achievement of Latino/a children of immigrants. Ethnic and Racial Studies, 32(2), 346-368.